“You have to stand up to bullies.” – murdered Punjab Governor Salman Taseer 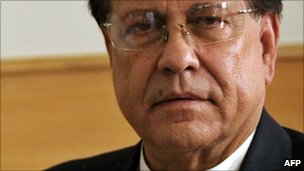 “You have to stand up to bullies. I can’t be the governor of a province and be a coward as well. I have to say what my conscience is telling me. And I feel the Pakistan we want is a progressive and liberal Pakistan.”

And for this they murdered him.

Hear this in his own words, click on the link below, then scroll down once you get to the article, in order to see the video:

Where are the moderate Muslims?

The courageous ones, who speak out, are killed or threatened with death and have to flee. The ones who are afraid of murderous Islamic bullies stay silent, keep their mouths shut, so they will not end up like the courageous Salman Taseer.

“It is a very, very shocking incident,” said one man at the candlelit vigil in Kohsar Market.

“We are small in numbers when we speak against all this extremism that’s going on,” one lady tells us.

“There are many people who will not come out because they’re afraid. My children want to go abroad rather than be suppressed in this manner.”

These Muslims who follow the violent teachings of the Koran terrorize their fellow Pakistanis and men like them will terrorize Americans, once they have the numbers they need to feel powerful in the US.

Having said that, this brave man is clear evidence that not all Muslims are a threat to the civilized world. The world needs more men and women like Salman Taseer. Sadly, the world will need many, many more if even a few are going to survive the dangerous move standing up and speaking boldly for what is right – because any who do will become targets.