Why being concerned about Islam is not a phobia. 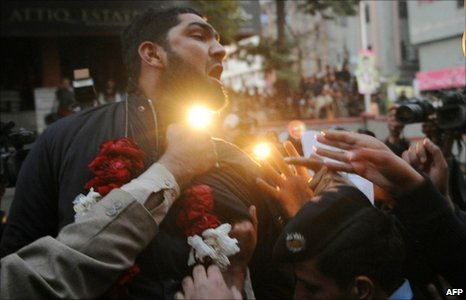 Mobbed and garlanded outside court, Mumtaz Qadri shouts: "We are ready to sacrifice our life for the prestige of the Prophet Muhammad"

“When asked how he could glorify the confessed killer of a constitutional head of a province, a lawyer said “the law that says that Mr Qadri is a murderer was not drawn in accordance with Islam”.

When a group is so certain that their way is the only true way that they begin to excuse murder of anyone who disagrees and when they feel justified in ignoring any law but the Law of Islam, that is going to be a problem – whether the country is England, Sweden or the US.

It’s not phobia to hear stories such as this and respond by not wanting this kind of thing in your country, your city or your neighborhood. Freedom, yes, openness, yes but we need to be able to say “No” when people begin teaching and spreading this kind of poisonous ideology.

To not resist an aggressive, violent force like Islam is like opening the door of your home to wolves because you don’t want to restrict their freedom.

More from the article:

“So, has Pakistan’s society passed firmly into the grip of the extremists?

Political and defence analyst Dr Hasan Askari Rizvi believes that if it has not already, it is nearly at that point.

“The radical element, which uses violence as a political tool, is limited in numbers,” he says.

“But the mindset that sustains militancy, that dilutes or prevents action against it – I think that has become fairly widespread.

“It has seeped into our educated classes, governmental institutions and the armed forces, where you can detect sympathy for militancy, and also to an extent for the Taliban.”

This is the danger of having a large “moderate” Muslim population: even though they are not extremists, they have a mindset (as a result of being taught from the Koran, in mosques) that “sustains militancy, that dilutes or prevents action against it.”

Even if they do not openly commit violent acts against non-Muslims, they both provide cover for “extremists” to hide in and provide “sympathy for militancy” as well as crucial financial support.

Another common defense of Islam, that there are “only a few extremists” is not a valid argument, because the large crowds of “moderates” are irrelevant in preventing the violent “few” from causing fear and destruction.

“Although the religious organizations declared participation in Mr Taseer’s funeral a sin, tens of thousands of people held funeral prayers for him in every nook and corner of the country,” he says.

In addition, he points out, the religious forces have never attracted more than 6% of votes in any election.

“Their failure to attract voters explains why they have promoted a culture of intimidation and murder,” he says.

“And they appear to be succeeding because our security establishment has often supported them for their own geo-strategic reasons.”

Intimidation and murder are powerful tools. We have already seen both used against American citizens on American soil by Muslims who are convinced they are following the teachings of the Koran. We simply do not need more of this and we do not need more mosques teaching this to a growing population of Muslims in the US. However large it is, it is not a positive force in our nation.

Whatever small amount of “good” the “moderate” Muslims might do, it is vastly outweighed by the risk of murder and oppression to our citizens.

“Dr Askari believes that it will take a “generational process” to bring reason back into public discourse.

“If we really want sanity to return to our society, we will have to establish a long-term dialogue through educational institutions, the media and all sections of the society, and facilitate a fusion of ideas.

“If we allow the liberal and the religious streams to continue on separate paths, we risk aggravating social conflict.”

One of the reasons the militant expressions of Islam has been so persistent over centuries is that violence and bigotry is taught in the Koran as ultimate truth. It hasn’t changed over hundreds of years.

Another barrier in the way of transforming Islam is the very clear teaching in Islam for Muslims to stay separate, to not make friends with non-Muslims. Show me one nation where “long-term dialogue” and a “fusion of ideas” has transformed a Muslim nation.

It’s like saying long term exposure of wolves to plenty of rabbits will eventually make the wolves into vegetarians.

Since it is extremely unlikely that the world is going to transform Islam into a peaceful, tolerant ideology, perhaps the best we can hope for is to insulate and protect our people from its attacks by not letting its aggressive system grow within our nation.

For example, the open-mindedness of Sweden, the UK, France or the Netherlands has not changed Islam within their borders, it has only made them more vulnerable to attack.