No, Katie Couric, a Muslim sit-com will not solve the problem.

Here’s a helpful tip: certain phrases are pretty good indicators that someone is trying to pull a fast one on you, bullshit you with propoganda.

There is a concerted effort to sanitize Islam in the US, to gloss over – even suppress – Americans’ legitimate concerns about the negative effects that Islam has had in so many nations where it has grown in numbers and influence.

This effort to sanitize Islam involves a three-pronged approach:
1. Try to make you feel guilty for objecting to the oppressive, hateful teachings of the Koran and Islam by calling you a bigot if you object.
2. Try to package Islam in a way that you will think it is harmless, not a threat, so that you will not see how dangerous it is until it is too late
3. Aggressively push back and shout down anyone who opposes Islam.

Understand, these are all expressions of the core driving force ofÂ  Islam: the Koran clearly teaches that Islam is the only true religion, and that lying, oppressing and killing are all justified if they help in reaching the prophesied goal of the entire worldÂ  submitting (or being forced to submit) to the teachings of the Koran.

So, when you hear someone in the media talking about “xenophobia”, this is a ploy to make you shut up, to stop expressing legitimate concerns about the hate-promoting aspects of Islam.

Katie Couric recently referred toÂ  the â€seething hatred many people feel towards all Muslims.â€ Where? Have you seen seething hatred against Muslims?I haven’t. I’ve seen concern, even fear. I’ve seen resentment and mistrust (gee, I wonder why, when their holy book tells them it’s OK to lie to us if it helps Islam?)

This is the seething hatred I’ve seen: 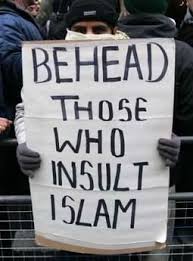 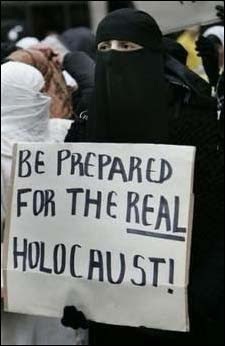 So, good grief, I will laugh in your face if you call me “Islamophobic”. Muslims openly shout about beheading, butchering, slaying those who disagree and you think I’m just imagining things?

This is another strategy of those trying to push Islam on us: they make outrageous statements (such as accusing people: “You’re a bigot!” when Islam is the most bigoted religious/political ideology on the planet.) they make those outrageous statements and then push so aggressively that anyone who objects backs down – and submits – in effect capitulating to Sharia Law, which prohibits any criticism of Islam

Let’s be clear: I do not hate Muslims.

I am not judging millions of people based on the actions of a relatively small number who kill and destroy. I am not putting the quiet lady in a burqa shopping at Costco in the same box as the guy who straps explosives to a woman in a burqa.

So, repeat: I do not hate Muslim people. I do, however, hate it when someone oppresses others, shoves their way as the only true way, and steamrolls anyone who disagrees.

Don’t play the “Religious Freedom”card on me. I do not have to accept Islam in order to promote religious freedom. In fact, it is exactly because I value freedom of religion (or freedom to have no religion at all) that I must reject Islam strongly, because Islam tramples on religious freedom anywhere it has sufficient numbers and power to do so.

Islam is tolerant until.

Until it has enough political and financial power to insist on it’s own way over any other.

Look at the recent “Rally” in Pakistan over the “Blasphemy Law”.

What is the Blasphemy Law? Well, if you disagree with Islam or any of its teachings, in any way, that is Blasphemy and Pakistani Muslims want that to be punishable by Law. Does that sound like religious freedom to you? The truth is, it’s not a Blasphemy Law, it’s an “Any other religion or world view besides Islam is evil and must be crushed” Law

“ISLAMABAD, Pakistan â€” A crippling strike by Islamist parties brought Pakistan to a standstill on Friday as thousands of people took to the streets, and forced businesses to close, to head off any change in the countryâ€™s blasphemy law, which rights groups say has been used to persecute minorities, especially Christians.”

You see, the media is not going to present this as, “Pakistani Bigots lobby to make all other religions except Islam invalid.”

Besides, when Muslims oppress other religions, in their minds they are not being bigoted rather, they are punishing blasphemy, because Islam is right and all other religions are wrong.

They are not the same. It’s like the difference between dropping a rock and dropping a bomb.

Islam has already gained a significant foothold in the US, and is beginning to use that clout to pressure American media, politicians and businesses. It’s being served to you under the guise of political correctness and “religious freedom”.

“CBS anchor Katie Couric believes a â€œMuslim version of â€˜The Cosby Showâ€™â€ could open the eyes of Americans and perhaps put an end to all the â€seething hatred many people feel towards all Muslims.â€

On her CBSNews.com web show, Couric discussed 2010 in review with a panel, and among Couricâ€™s biggest concerns about 2010 was the controversy surrounding the Park51 Islamic Cultural Center project.

â€œThe bigotry expressed against Muslims in this country has been one of the most disturbing stories to surface,â€ Couris said. â€œOf course, a lot of noise was made about the Islamic Center, mosque, down near the World Trade Center, but I think there wasnâ€™t enough sort of careful analysis and evaluation of where this bigotry toward 1.5 billion Muslims worldwide, and how this seething hatred many people feel for all Muslims, which I think is so misdirected, and so wrong â€” and so disappointing.â€

Here, let’s just fix this once and for all, here’s what would “put an end to” the fears and concerns of Americans: for Muslims to show us with their actions that they are truly tolerant and that they reject the violent, hateful, oppressive sections of the Koran.

I do not have seething hatred for all Muslims. Go ahead, pray to Allah, do your rituals, speak whatever language you like, dress however you like. Just do this one thing and I will be fine: take out every word in the Koran that advocates killing, oppressing, taxing, mis-treating Jews, Christians or unbelievers. Show us how important religious freedom is to you. Repudiate those parts of the book, take ’em out.

You should be afraid of that. It would not be a good thing for America.

Folks, it’s not bigotry to be offended by Islam. Objecting to Islam is expressing revulsion at an ideology that, if it could, would trample everything we hold dear.