Free Speech under Islamist Assault in US and UK

“In the United States, we still have free speech despite the efforts of Islo-fundies to exempt their authoritarian belief system from normal criticism. One strategy has been for them to appeal to the United Nations for a worldwide anti-blasphemy law.

Havenâ€™t all the well-paid lawyers of the Council of American Islamic Relations [CAIR] (who try to intimidate Americans to shut up, like the Flying Imams lawsuit etc.) informed their foreign bosses about the First Amendment? The robust exercise of free speech has a long history in America.

Koraniacs repeat the idea that burning their kill-infidels book is hate speech, which is against all legal tradition and cultural norms of this country. If the Muslims want Koran protection, they should go live among the friendly ummah in spacious sharia-land.

Of course, all the wailing is for show, to portray Islamics as the victims, even as their brothers in religion are murdering non-Muslims every day in the name of Allah.” 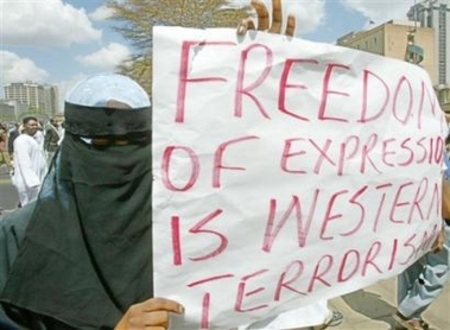