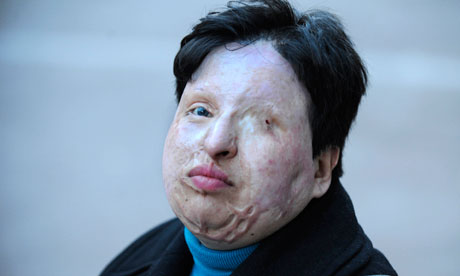 Ameneh Bahrami, who was blinded when a spurned suitor threw acid at her, asked for the same to be inflicted on him. Photograph: Lluis Gene/AFP

In a literal application of the sharia law of an eye for an eye, Iran is ready for the first time to blind a man with acid, after he was found guilty of doing the same to a woman who refused to marry him.

Majid Movahedi, 30, is scheduled to be rendered unconscious in Tehran’s judiciary hospital at noon on Saturday while Ameneh Bahrami, his victim, drops acid in both his eyes, her lawyer said.

Bahrami who had asked for an eye for an eye retribution in the court, was disfigured and blinded by Movahedi in 2004 when he threw a jar of acid in her face while she was returning home from work. “He was holding a red container in his hand. He looked into my eyes for a second and threw the contents of the red container into my face,” she told the court in 2008.