Khalid Aldawsari, Texas student: “And now … it is time for jihad.” 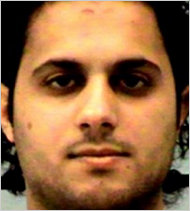 In it, Mr. Aldawsari wrote that his enrollment at Texas Tech had given him a type of access to his desired targets, officials said. It also made clear, they said, that he had planned to carry out bombings long before September 2008, when he came to the United States on a student visa.

â€œAnd now, after mastering the English language, learning how to build explosives and continuous planning to target the infidel Americans, it is time for jihad,â€ Mr. Aldawsari wrote, according to court documents.”

The defendant, Khalid Aldawsari, 20, a chemical engineering student, had obtained two of the three chemicals needed to assemble a bomb during the past several months and had sought to buy the third, prosecutors said. He was arrested Feb. 23.”