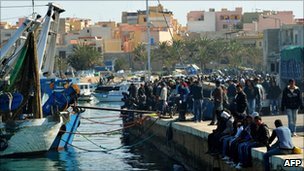 “Boatloads of migrants fleeing fighting in Libya are beginning to arrive in southern Italy, say officials.

The region is already struggling to cope with a huge influx of migrants arriving from Tunisia.

Since January, at least 15,000 migrants have arrived, many of them landing on the tiny island of Lampedusa which is struggling to cope.”