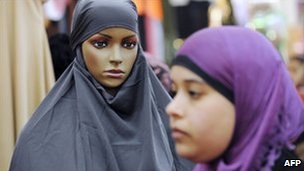 “French President Nicolas Sarkozy has sacked his diversity adviser after he called on Muslims not to support the governing UMP party, reports say.

Abderrahmane Dahmane, a Muslim and former UMP official appointed to his post only in January, was protesting against a planned debate on Islam.

He said Muslim members of the UMP should not renew their party membership unless the debate was cancelled.

He condemned UMP leader Jean-Francois Cope as a “plague for Muslims”.