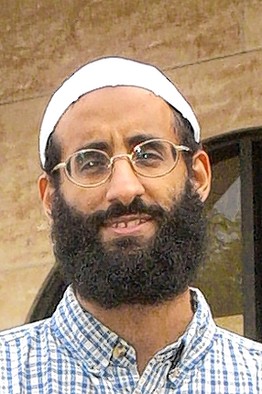 Anwar al-Awlaki, an American born in New Mexico - yet another home-grown terrorist, educated in an American Mosque

WASHINGTON â€“ The Obama administration on Saturday invoked the state secrets privilege which would kill a lawsuit on behalf of U.S.-born cleric Anwar al-Awlaki, an alleged terrorist said to be targeted for death or capture under a U.S. government program.

Believed to be hiding in Yemen, al-Awlaki has become the most notorious English-speaking advocate of terrorism directed at the United States.

Al-Awlaki [was also involved in] preparing Umar Farouk Abdulmutallab in his attempt to detonate an explosive device aboard a Northwest Airlines flight from Amsterdam to Detroit on Christmas Day 2009.

“Our unsettled account with America includes, at the very least, one million women and children. I’m not even talking about the men,”Â  al-Awlaki [is quoted] as saying.

In its court papers, the Justice Department said that the issues in the case are for the executive branch of government to decide rather than the courts.