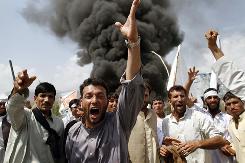 Afghans shout anti-U.S. slogans as they burn tires and block a highway during a protest in reaction to a small American church's plan to burn copies of the Quran, at Jalalabad, east of Kabul, Afghanistan, Friday.

“KABUL, Afghanistan (AP) â€” Thousands of Afghans are protesting a small American church’s plan to burn the Muslim holy book. At least 11 people have been injured.

Police in the northern province of Badakhshan say several hundred demonstrators ran toward a NATO compound where four attackers and five police were injured in clashes. Protesters also burned an American flag at a mosque after Friday prayers.”