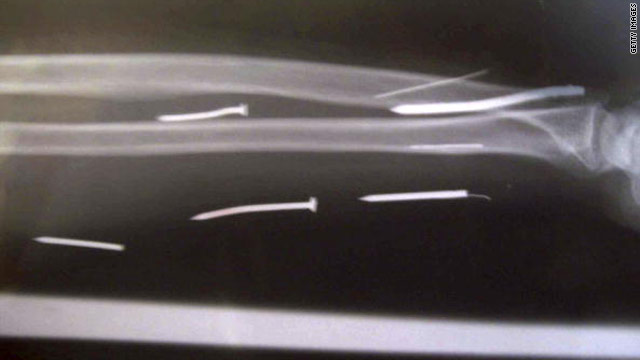 An X-ray shows nails hammered into the body of a Sri Lankan maid.

Colombo, Sri Lanka (CNN) — Doctors at a Sri Lankan hospital operated for three hours Friday to remove 18 nails and metal particles allegedly hammered into the arms, legs and forehead of a maid by her Saudi employer.

She was held down by her employer’s wife while the employer hammered the heated nails … She apparently had complained to the couple that she was being overworked.

Ariyawathie, 49, is a mother of two children who were opposed to their mother’s journey to Saudi Arabia for work.

Many of the [Saudi] domestic workers are poor Asian women from Sri Lanka, Indonesia, India, Bangladesh, the Philippines and Nepal. Widespread abuse has been documented by global human rights groups.

Isolation and forced confinement contribute to psychological and physical abuse, sexual violence, forced labor, and trafficking, the report said. The abuse often goes unchecked because of a lack of government regulation and protective laws.

I just don’t understand why narrow-minded, xenophobic, Islamophobic Americans are so unwilling to embrace Islam.