Rafiqul Islam cut off his 21-year-old wifeâ€™s fingers with a machete – for pursuing higher education without his permission. 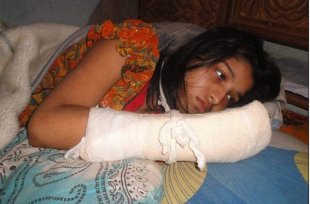 “Human rights groups in Bangladesh have mobilized in requesting severe punishment for 30-year-old Rafiqul Islam, who has admitted to using a machete to cut off his 21-year-old wife Hawa Akther Juiâ€™s fingers on her right hand as punishment for pursuing higher education without his permission.

â€œThe incident is one of a number of acts of domestic violence targeting educated women in recent months.

Police say that Mr Islam, who works in the United Arab Emirates, tied up his 21-year-old wife, Hawa Akther Jui, earlier this month. He then taped her mouth and cut off the five fingers.

Doctors say the fingers cannot be re-attached and it appears that Ms Akther will have to live with permanent disfigurement.â€ The Daily Mail reports that the attack is only the latest in a series of violent acts against educated women in the â€œMuslim-majority company.â€

In June, an unemployed man gouged out the eyes of his wife, an assistant professor at Dhaka University, apparently because he could not stand her pursuing higher studies at a Canadian University.”