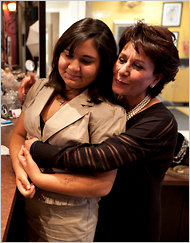 Michael Stravato for The New York Times Nahid Sabet of Houston and her daughter, Nica, almost 14.

“…The story, as revealed over several hours by Mrs. Sabet, began on the day 40 years earlier in Tehran when, as a 15-year-old, she converted from her familyâ€™s Muslim faith to the Bahai religion. Bahaism had emerged a century earlier, proclaimed by a Persian noble after a revelation from God of a monotheistic, pacifistic doctrine. Many of Iranâ€™s Muslims, including Nahidâ€™s parents and siblings, deemed it heresy.

Tending to their apostate, Nahidâ€™s parents selected for her a Muslim husband. One of her brothers swore that no child of hers would be a Bahai. What the family had not evidently anticipated was that their chosen groom, Abdolreza Arash, would accept his wife as a Bahai.

For his tolerance, Mr. Arash had his electronics factory confiscated and was sent to prison several times. Mrs. Sabet was fired from her position as an accountant, arrested three times, jailed twice, pressured with electric shocks to recant and inform. She did neither.

Three times in the late 1980s and early 1990s, Mrs. Sabet became pregnant. Three times, as she recounted to Nica on the beauty salon sofa, she was beaten and denounced by a brother and brother-in-law. Three times she miscarried. The pregnancies were just far enough along, between 3 and 5 months, for her to recognize what she had lost: one daughter and two sons.”

Once again we see the tolerance and peace expressed by followers of Islam.